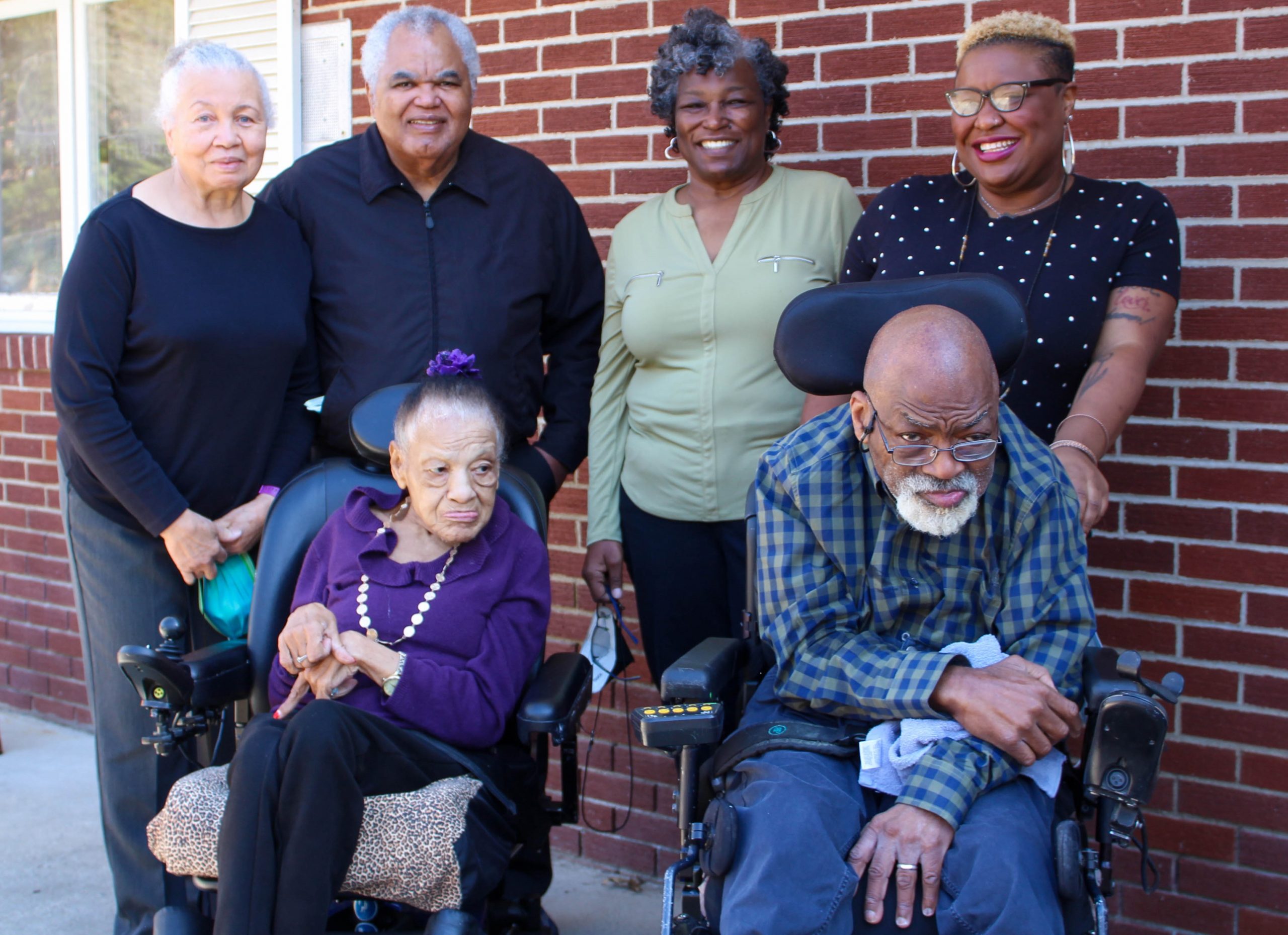 Henry Wesley has experienced a lifetime of tragedy and triumph.  And now, after decades of possessing only the barest of information about his mother and the rest of his family, he recently got to meet new-found relatives for the first time.

Stories of people separated from their families at an early age can be heart-wrenching, and Henry’s story is harder than most.  He was born in South Carolina in 1945.  His parents split up while Henry was an infant, and he and his mother moved to New York State.  Noticing that Henry didn’t seem to be developing at the appropriate pace for a 2-year-old, his mother took him to see a doctor.  The physician diagnosed Henry as having cerebral palsy, developmental disabilities and physical impairments.  His mother realized she couldn’t afford to provide Henry the care he would need, so she surrendered custody of her son to the State of New York.

Young Henry was sent to live at the Wassaic State School, a large center in Dutchess County that was home to thousands of people with developmental disabilities.  Similar to other state schools, Wassaic was plagued by overcrowding and understaffing, which resulted in the severe neglect and mistreatment of the people who lived there.

Henry arrived at Wassaic in 1948, and the following year he was transferred to the Willowbrook State School on Staten Island.  He languished there until 1972, when media reports of the terrible conditions at Willowbrook led Albany leaders to begin the process of reforming New York State’s system of caring for people with disabilities.  Still, Henry would spend 15 more years in institutions before coming to Chautauqua County to live in a new community residence operated by The Resource Center.

Since leaving the institutional setting, Henry has thrived.  He has become a passionate advocate for people with disabilities.  Computers have enabled Henry, who does not communicate verbally, to share his life story with others to help ensure that the maltreatment he and others received in institutions will never again be allowed to occur.

His greatest personal achievement occurred November 5, 1994, when he married the love of his life, Jean.  The two first met in 1972 after Henry had moved back to Wassaic, where Jean had lived for more than 30 years.  Later, they rekindled their relationship after they came to The Resource Center. 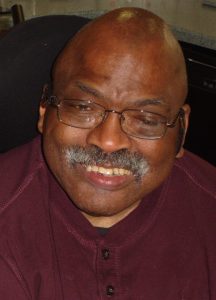 It was Jean’s own ancestry search that inspired Henry to hunt for his long-lost family.

Four years ago, Jean was able to find information about her mother, who died when Jean was 7 months old.  Jean learned where her mother was buried, and she and Henry traveled to New York City to visit Jean’s mother’s gravesite.  (During that visit, they saw there was no marker at the grave.  Jean subsequently had markers created for her mother and two other relatives buried in the same plot.  She had started making plans to return to the cemetery in 2020, but that trip has been delayed because of COVID.)

Prior to this, Henry had been ambivalent about pursuing his own family history.  Having been abandoned by his mother, he had little interest in learning anything about his family.  But Jean’s success in finding out about her family history led Henry to embark on a similar search.  With support from his self-determination assistant, Britnie Barmore (who had supported Jean to track down her mother), Henry submitted a DNA sample and waited to see what he would learn.

The results have been more extensive than Henry could have imagined.  DNA matches came pouring in.  At first, Henry wasn’t ready to act on the information he received.  But over the course of two months he warmed to the idea and asked Britnie to assist him.

“Britnie has helped me the last eight-ish months by doing advanced searches with the information I had from my admission summary report from Wassaic,” Henry said.  “Together, we searched through public family trees that showed up as `hints’ on these advanced searches.  We were able to locate a person who had the same first name, middle initial and date of birth as the information I had on my mother from the Wassaic admission report.  We clicked on that profile and noticed that we had an ancestor in that tree who was a direct DNA match, listed as my second or third cousin.”

Henry and Britnie contacted the cousin, Deborrah Wesley, who at first was skeptical that her relative was Henry’s mother.  But Deborrah started asking other family members about Henry, and she eventually realized she and he were related.  Britnie supported Henry to phone Deborrah to ask some questions, and he was able to learn that Deborrah was his mother’s cousin.  He also learned he was his mother’s only child.

Henry also learned his mother, Lena Belle Badger White, had died in 2014, so he couldn’t ask her questions about his early years and why she had surrendered custody of him.  But Deborrah has given Henry a lot of information about his mother and has sent him photographs of his mother, his maternal grandparents and his mother’s siblings.

Deborrah referenced another cousin, Lillian, who is still living.  “I remember Lil, as she used to visit me while I lived at Willowbrook,” Henry said.  “Lil said the last time we saw each other, she was about 15, and I was around 5.”

The mention of Lillian’s name brought back some memories Henry had suppressed.  He remembered Lil visiting him at Willowbrook, and he remembers his mother visited him there during the 1950s but then stopped coming.

Information provided by Deborrah has helped answer some of Henry’s questions while also deepening the mystery surrounding his early years.  Deborrah said other family members stated Henry’s disabilities resulted from a fall as a baby.  She and Lil also said that his mother had been persuaded by her boyfriend to surrender custody of Henry when he was 2.

It was also frustrating for Henry to discover that his admission report from Wassaic contained incorrect information regarding family names.

Having connected with his mother’s side of the family, Henry was eager to know more about his father, William Maner, and other relatives on his paternal side.  Deborrah put Henry in touch with his half-sister Margaret, and the two chatted by video.

“My sister sent me many pictures of my father, who passed away in 2014 as well, and also told me that I have about 20 other siblings,” Henry said.

Going from having almost no information about his family, to learning he has about 20 siblings and a large extended family, has been a lot for Henry to absorb.

“This is a lot of information to take in, but it has cleared up years of questions, and I am very overjoyed to find out I have brothers and sisters who want to be a part of my life,” Henry said recently.  “I am happy to have made these connections, and I look forward to meeting my family in person.”

That day came sooner than Henry could have imagined.   In early spring four members of Henry’s family traveled to Jamestown to meet him.  Deborrah and her cousin Alise Leslie came from their homes in North Carolina; Willie Smith (the brother of Henry’s mother) and his wife, Carolyn, arrived from Peekskill, NY.  They came to The Resource Center home where Henry and Jean live for a family gathering that was decades overdue.

As soon as he learned his family members had pulled up to the home in their cars, Henry eagerly maneuvered his electric wheelchair to the living room window to catch a glimpse of his relatives.  Willie and Carolyn arrived first, and Henry graciously greeted them as they entered the home.  Upon seeing Henry, Carolyn declared, “He does look like the Wesleys.” 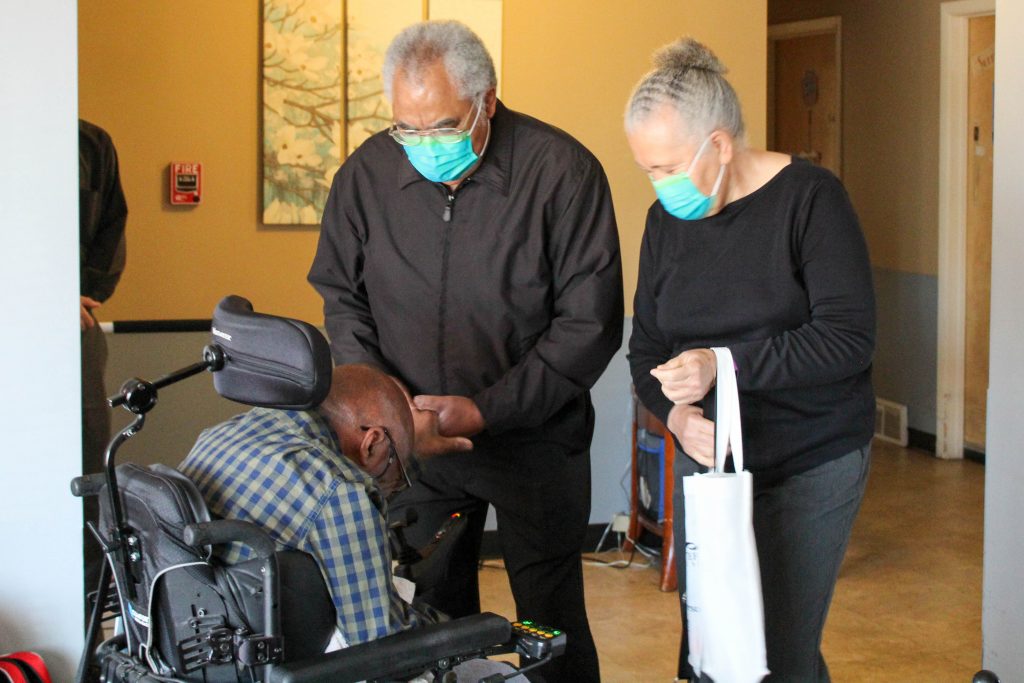 After Henry introduced Willie and Carolyn to Jean, the group made its way to the kitchen table to talk.  Carolyn had brought along family photos, and she and Willie took turns showing the photos to Henry and explaining who was pictured.  A short while later, Deborrah and Alise arrived at the home.  Thoughtfully, they brought gifts for Jean and Britnie.

Deborrah presented Henry with a framed montage of photos that also contained a shortened version of their extended family tree.

Henry shared photos of his life, including his wedding album and pictures of the places he has visited.  He also used his computer to play recorded messages describing the peaks and valleys of his life – from low points such as his experiences at Willowbrook, to his courtship with Jean and their marriage.

“You have had a full life,” Deborrah said while looking through Henry’s photo albums.  “I’m glad.”

During the reunion, Henry learned more about his history.  Willie said that when was a baby, he and his mother had lived with Henry’s great-grandmother, whose house was a gathering place for family.  So many relatives back then would have had knowledge of Henry.

Willie also remembered accompanying Henry’s mother on one occasion when she went to visit Henry at Willowbrook.  Willie said he was a young boy at the time, and because Willowbrook didn’t allow children to visit he had to wait in the car.  Willie also said Henry’s mother made the decision to stop visiting her son because Henry would cry uncontrollably whenever her mother left to go home, and the experience became too painful for her. 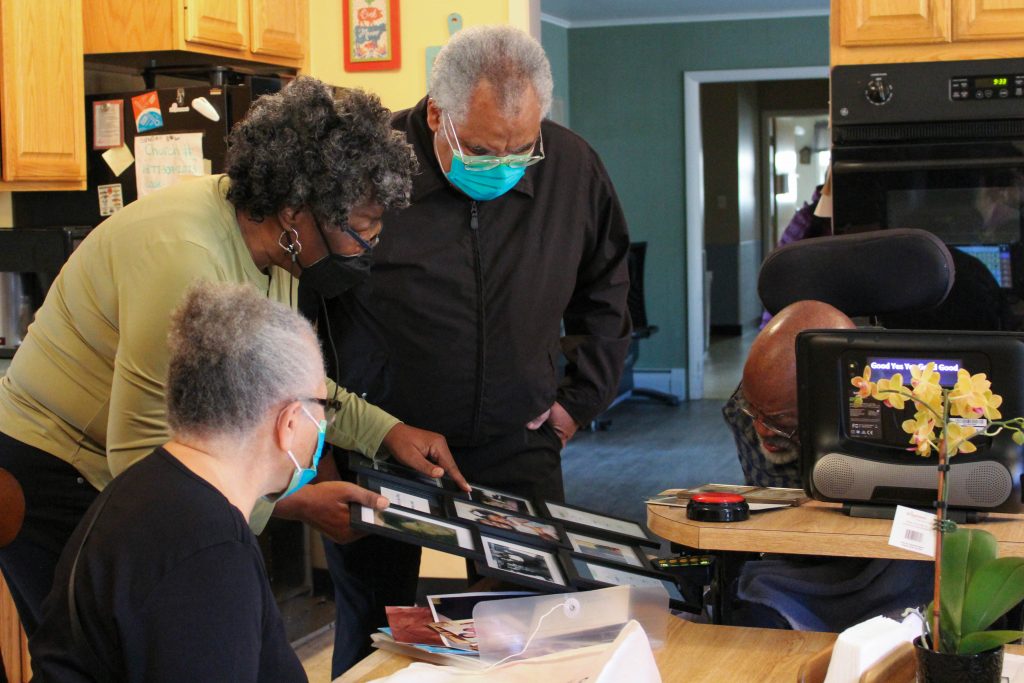 Deborrah points out photos of family members to Henry.

As they talked around the kitchen table, it was heart-warming to see the bonds that had formed so quickly among Henry and his relatives.  “I’m so glad I answered you,” Deborrah told Henry, referring to when he first contacted her after obtaining his DNA results.

Reflecting on his family visit a couple of days later, Henry was still basking in the glow of the reunion and the positive results that came from his DDNA test.

“I have often thought about my family, and wondered if they think of me too,” he said.  “I am overjoyed to have been able to find my family, and it brings me great joy that they took the time to travel to visit me.  We shared stories about our lives, many pictures, laughs, and even some tears.  I am grateful that this was able to come together the way that it did.”

And there still are more family connections to be made.  Henry and Jean have been invited to attend a family reunion in Florida in December, where they’ll have the opportunity to meet relatives on his father’s side – relatives who, until a few months ago, were unknown to Henry.

Henry went decades without knowing much about his personal history and his roots.  But now he is making up for lost time and learning what it means to have family. 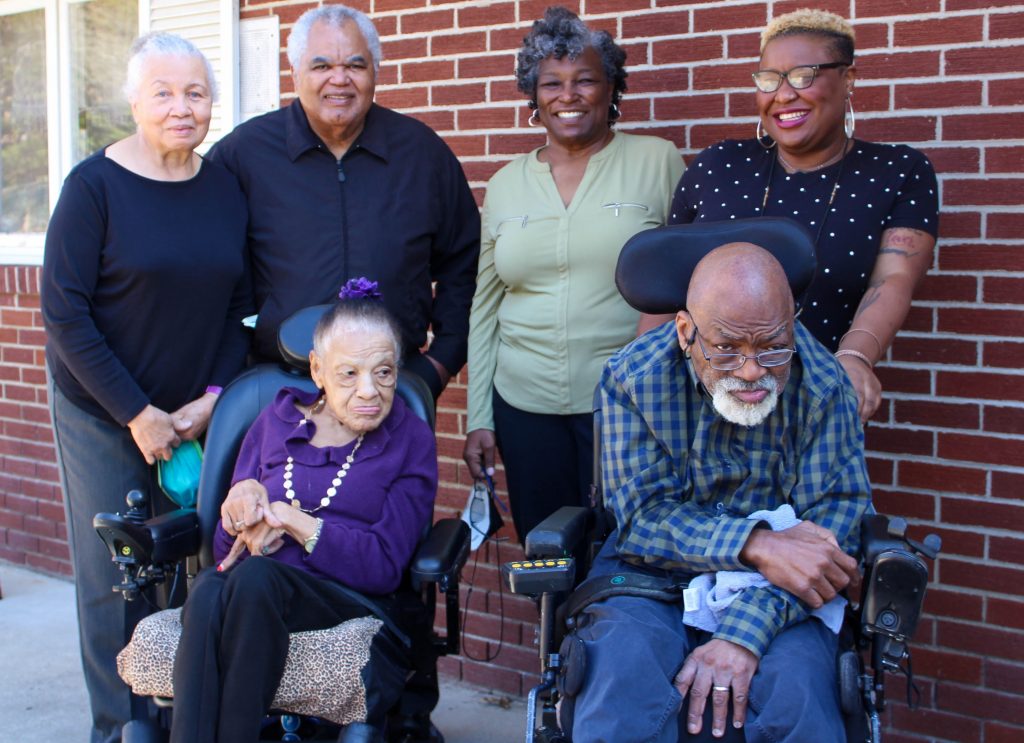 Standing behind Jean and Henry for their first family portrait are, from left, Carolyn Smith, Willie Smith, Deborrah Wesley, and Alise Leslie.