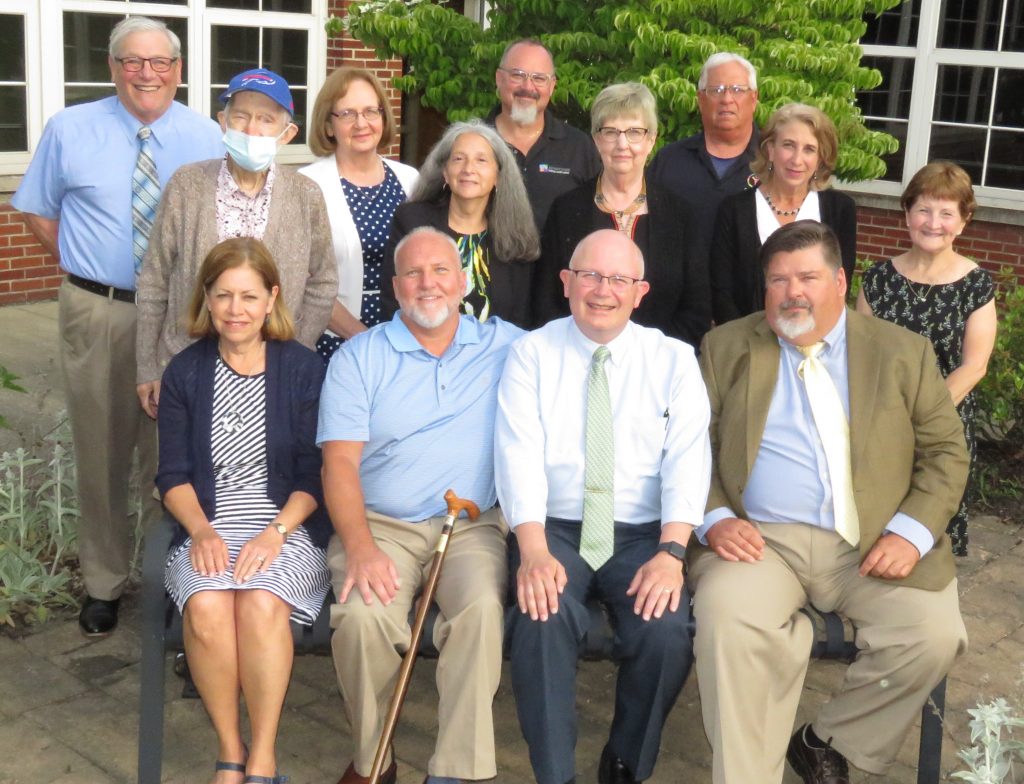 Chair – Richard Erickson, CPA, is the Director of Accounting for Chautauqua Institution and the Athenaeum Hotel. Professionally, Dick is a member of the American Institute of Certified Public Accountants and the New York State Society of CPAs. He has served on the advisory committee of the Southwest Chapter of the American Red Cross. He has served on TRC’s Board since 2015.

Vice Chair – Rich Kimball is a former TRC employee who is a retired School-to-Work Transition Specialist with Jamestown Public Schools. Rich is a member of Wounded Warriors, the American Bible Society and Special Olympics. His community service activities include supporting Zion Community Church and UCAN City Mission. Rich has relatives who receive supports from The Resource Center. He was appointed to TRC’s Board in 2019.

Secretary – Dawn Columbare, DNP, is a nursing education consultant who retired from Jamestown Community College after a career in which she served as the Director of Nursing and as a Nursing Professor. Dawn is a member of Sigma Theta Tau National Honor Society of Nursing and the National League for Nursing, and she serves as a peer reviewer for the Accreditation Commission for Education in Nursing Peer Reviewer. Active in the community, she serves on the Board of Directors and Board of Trustees for The Creche, Inc., and is Co-Chair of the Hospital Committee. She is a longtime member of Zion Covenant Church, where she chairs the Leadership Team.  Dawn chairs the Lily's Hope and Birthing Kit committees of Zonta International, and she sits on the Grants and Scholarship committees for the Chautauqua Region Community Foundation. She was elected to TRC’s Board in 2017.

Treasurer – Todd Jacobson, M.D., is the Medical Director for Occupational Health at UPMC Chautauqua. Todd is a member of the American College of Occupational and Environmental Medicine and the New York College of Occupational and Environmental Medicine. Locally, he is a past Board member of the Boys and Girls Club of Jamestown and the Jamestown Safety Council, and he plays trumpet with the Jamestown Municipal Band and the Pearl City Big Jazz Band. Todd has been a member of TRC’s Board since 2003, serving as Chair from 2012 to 2015. He has a daughter who receives supports from The Resource Center.

Timothy Adam recently retired after a 30-year career at SKF. He is the President of Affinity One Federal Credit Union and a Trustee at Kidder United Methodist Church. Tim coaches Special Olympics golf, swimming and floor hockey, and he is a founding member of the Lakewood Area Buddy Walk to support people with Down syndrome. He serves on the planning committee for TRC’s monthly dances at the Dunham Avenue building. He has a daughter who receives supports from The Resource Center. Tim was elected to TRC’s Board in 2020.

Douglas Anderson has been involved with The Resource Center for more than 40 years. He started out working at our Jamestown manufacturing center, and over the years he also worked on our Environmental Services cleaning crew. Even though he’s now retired, Doug has taken a role working with the team that interviews people who have applied for positions as Direct Support Professionals at The Resource Center. Additionally, Doug has lived in TRC residences for about four decades. He serves on our Human Rights Committee and is an active member of the Aktion Club, a community service group for people with developmental disabilities. Doug was elected to TRC’s Board in 2020.

Marie Carrubba, Esq., is the Executive Director of the Southwestern Independent Living Center. Long an active community volunteer, Marie currently serves on the Jamestown City Council. She is a member of the Jamestown Community College Board of Trustees; serves on the Chautauqua County Workforce Investment Board; and chairs the Boards of Chautauqua Opportunities, Inc., and Community Services. Marie first served on TRC’s Board from 1989 to 2000 and was Chair from 1997 to 2000. She also has served as Secretary and Vice Chair. She was reelected to the Board in 2010. She has been involved with TRC since 1983. Marie received our Lifetime Achievement Award in 2009, our Humanitarian of the Year Award in 2000 and our Advocate of the Yea Award in 1993.

R. Michael Goldman, Esq., is an attorney practicing in Jamestown, NY. He is a member of the American Bar Association, the New York State Bar Association and the Jamestown Bar Association. Active in the community, Mike is involved with Lutheran, Meals on Wheels and the Chautauqua Region Community Foundation’s Promise Fund. Mike has been a member of TRC’s Board of Directors since 2003, serving as Chair from 2016 to 2019. He also has served as Board Secretary and Vice Chair.

Robert Goold is a retired teacher, coach and athletic director with Frewsburg High School. Bob serves on the Board of the Jamestown Area YMCA. He is an Emergency Medical Technician with the Bemus Point Volunteer Fire Department and teaches first-aid skills to coaches. Bob volunteers at St. Susan's Center and the National Comedy Center. He has a son who receives supports from TRC. Bob was elected to the Board in 2022.

Donna Haenggi is a retired secretary and receptionist, and for many years she volunteered with Special Olympics. She has been volunteering with The Resource Center since the early 1990s. Her late husband, Bill, was also a longtime TRC volunteer and Board member, and they both served as TRC delegates to The Arc New York’s annual convention several times. We presented them with our Lifetime Achievement Award in 2018. They have a son who receives supports from TRC, and all three have helped to organize our monthly dances. Donna is a member of the BBoard oof Bethel Lutheran Church. She served on TRC’s Board from 2013 to 2019, and after a one-year absence she was elected to the Board again in 2020.

Patricia Perlee is the retired Executive Director of Joint Neighborhood Project. Patty is the President of the Board of the Chautauqua Home Rehabilitation and Improvement Corporation. She also is active with the Zonta Club of Jamestown, CHRIC and First Presbyterian Church. She became affiliated with TRC a number of years ago through her position with Joint Neighborhood Project, as she worked with many people who received medical care through The Resource Center’s Primary Care Clinic. Patty has served on TRC’s Board since 2013, and was Chair from 2019-22. She also has served as Vice Chair.

Marlene Sirianno, Esq., is Court Attorney Referee for Chautauqua and Erie County Supreme Courts. Marlene’s other community service efforts have included serving on the Chautauqua County Youth Hockey Association Board for several years in the past. She became involved with The Resource Center once her son began receiving respite supports from TRC. Marlene served on our Board from 2012 to 2019, and after a two-year absence she was elected to the Board again in 2021.

Barbara Stewart is retired and has been involved with The Resource Center for more than 30 years. Barb is a member of the Daughters of the American Revolution, is active in her church and is a Poll Site Coordinator with the Chautauqua County Board of Elections. She also serves as Secretary/Treasurer of Chautauqua Connections, Inc. She has a son who has received supports from TRC for many years. Barb served on the Board from 2003-2010, then again from 2012-18, including one year as Vice President.  She was elected to the Board again in 2022.